Quirky, touching, funny. Basically, everything you could want in a story.

Millie is just 7 years-old. After her father’s passing, Millie finds herself fascinated by dead things. One day, Millie’s mother leaves her under a rack of underwear at a department store with instructions to stay put. After a long night in the store and her mother nowhere to be found, Millie ends up at the coffee shop where she meets Karl, “the touch typist” who types out what he is saying as if he were typing it out on a keyboard.

Millie returns back home briefly, to see if her mother is there but when she returns to an empty house she goes looking for food and runs into Agatha, the cranky widow who lives across the street. Agatha has been closed off to the world ever since her husband died. She screams things at people and seems at odds with everyone she encounters, including Millie who shows up on her doorstep asking for food.

Karl, “the touch typist” is in his 80s and an odd companion to Millie but the two get to know one another and forge an unlikely friendship when he vows to help Millie find her mother. Having lost his own wife, Karl can relate to Millie’s sense of loss. And then Agatha, forcing herself to be brave, decides to head out into the world to assist Millie as well. Together, all three deal with their losses as they lean on one another for support.

What a wonderful story. I absolutely LOVED it! These three are so different from one another in personality but they all come together so well. I suppose their shared grief has something to do with that even though Millie is really too young to understand what is going on. Her youth and innocence is in stark contrast to what the other two have been through so their interactions although on the surface are humorous, usually hint at something much deeper.

This book is so many things to me! It was funny, and sad and also a little bit of an adventure. The characters are really interesting and I could relate to all of them and that’s such a rarity these days. I could go on and on but instead, I ask that you run out and get a copy right now because it’s just so good.

Brimming with wit but tame as far as horror stories go.

One sunny afternoon, an entire neighborhood finds itself the center of destruction when a group of demented villains show up in vans and basically shoot anything that moves. As the residents watch in horror, they suddenly realize that this is no random act and that their quiet little neighborhood is under siege.

The Regulators was published under the name Richard Bachman, but most King fans know that Bachman is the pen name King used for several years. As far as his books go, this is one of the tame ones. There are lots of characters to keep track of in this small neighborhood but their personalities are different enough (in most cases) to keep everyone straight. There is a supernatural element but he doesn’t spend too much time on that aspect of it, just the aftermath and how it affects this particularly unlucky neighborhood. The story is a little farfetched but by the end, I was buying it. It’s definitely not one of his stronger books, but I did enjoy reading it and it was a quick read. 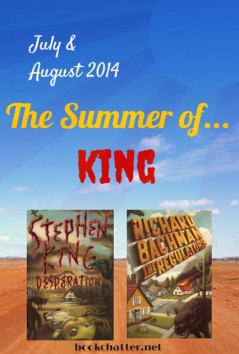 When I posted about The Summer of King, and how I wanted to spend my summer reading King books, some of you told me that The Regulators and Desperation happen to be related. When I chose those two to read, I had no idea that they featured parallel worlds. Talk about dense. I mean, if you look real hard you can even see how the cover art connects to one another. Anyway, so although this book was a little tame for me, I appreciate King’s classic sense of humor in relation to being blown to bits, cheating wives and annoying kids. I chuckled many times and now can’t wait to re-read Desperation as I read that one when it first came out and cannot remember a thing about it!

Have you read a King book lately?