Layered and rich. This story grabs you and holds you.

Elle returns with her family to The Paper Palace. It’s the summer home of her youth that she has visited every summer of her life, but this particular summer morning, she wakes to the fact that the night before, after a few drinks and memories from her youth take hold, she hooked up with her childhood friend Jonas,  while her family, innocently, gathered in another room.

Elle is happily married to Peter. Truly. He is funny, and loving, and dependable and a good father to their children but the bond that she has with Jonas goes way back, way back to earlier summers where they both shared a secret that ultimately affected Elle’s entire life. The story is told in the past and present, alternating between young Elle and married Elle and as the secret comes to light, things get tense. How can you right a wrong so many years later?

I didn’t know anything about this story when I picked it up. It was a Reese Book Club pick and I went in blind. I have had a lot of luck with her picks. The Paper Palace was no exception except, don’t let that pastel cover fool you. It opened in a kind of smutty way, for lack of a better word and then got pretty gritty. You should know, there are triggers in this story for anyone who suffered from sexual abuse in the past.

That said, this story held me captive. I thought I’d read a chapter here and there but I blew through it in a day. It’s complex. The characters are imperfect but their demons are real. It has secrets and moral dilemmas and gives you a lot to consider. I must say, the mother/daughter dynamics are very well-done here.

I can’t say I loved this book because the subject matter is tough but it’s a very good read and superbly written. Highly recommend.

How is Sunday treating you so far? We are good here. Weather has been nice. Not too hot. Feels a tad tropical with our 30% humidity but  I am not complaining. I’ve embraced the messy hair bun so frizz is not a concern.

Not a lot going on at the moment. This past week, I’ve noticed a decline in activity for the pup. Could it be possible that she is just sick of seeing my face now? She’s not spending her morning sunning like she usually does. She prefers to just stare at me from afar. Her face is saying, “Are you still here?” I bet she misses me when I return to work though. That will be a whole thing to transition into. That said, debating on whether it’s too warm to take her for a walk right now.

My daughter and I leave for Missouri on 8/17 and I am getting to the point when I am thinking of just winging it. I can’t sit down and plan anything. It all seems like too much or not reasonable. I envy those of you who just fly by the seat of your pants because I am a planner, normally, but haven’t been good at it since the pandemic.

My review of Count The Ways posted last week so be sure to check it out if you missed it. Gosh, I loved that book.

What I say I am going to read ends up being different from what I actually pick up. You know, mood. I am supposed to be reading Damnation Spring but picked up Where The Truth Lies. So far, so good. 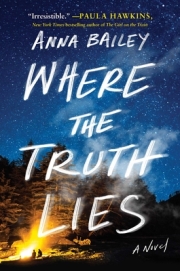 Haven’t been watching anything. Just reading. A first.

Do you have what I call a Sunday dinner? One where you all sit down and enjoy a special meal? I like to do this but these days with one kid gone and the other packing in her social activities like they are going out of style, I’ve not done it lately.