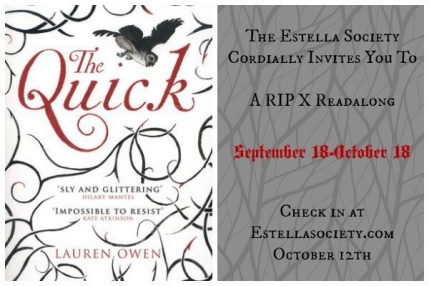 In connection with R.I.P. X, the Estella Society is hosting this group read along of The Quick, by Lauren Owen. I had not planned to join in, but another blogger (Belle), mentioned that she was going to look for a copy. I can’t resist a read along when my favorite people are involved. So, I got myself a copy and I am ready to go!

Goodreads has this to say about the book:

For fans of Anne Rice, The Historian, and The Night Circus, an astonishing debut, a novel of epic scope and suspense that conjures up all the magic and menace of Victorian London.

Hello! I am so there. Doesn’t it sound good? Will you be reading it too?

The original post says the details will be noted over at Fig and Thistle but as of this writing, I haven’t seen the linky post yet. Nevertheless, I am reading along.

An asylum, a young woman who has supposedly gone mad, the English setting…and yet I struggled with it.

Georgina Ferrars wakes up in an asylum. She can’t remember how she got there or why, but she is quickly told that she admitted herself under the name of Lucy Ashton. When she questions this, her uncle back home is notified and he confirms that the REAL Georgina Ferrars is in fact, with him, and that there must be some mistake.

As you can imagine, the mistaken identity piece of this story is what’s most puzzling. Why is she in this asylum? What is going on back home? Is someone doing this to her on purpose? These are the questions that kept going through my mind. I’ve never been one to turn down a book that had anything to do with an asylum. The setting fascinates me as done anything pertaining to psychology or mental illness so this book felt like a good fit for me. Especially, the first half.

But then something strange happened. The story started going back and forth with flashbacks and the like and somewhere along the way, the author lost me. I mean, I was totally and utterly lost! I backtracked and reread entire chapters and could not figure out what was going on. It was so bad at one point, that I checked page numbers to see if my copy had a chunk torn out. Nope. The pages were intact and then out of nowhere, I was suddenly reading a lesbian love scene. Not a bad scene, quite well-written actually, but how did it fit into the story? I haven’t a clue!

This is one of those situations where I either totally spaced out, or I missed a critical line somewhere but the entire second half was a mystery to me. Even the ending. I haven’t a clue what transpired. I feel silly for admitting this but I have to be honest. I got really frustrated trying to figure it out and decided that if I just continued to read, it would all fall into place. No, it did not.

I have to say though, that first half was quite compelling. Harwood’s handling of the setting is what made that first half a page-turner for me. I just wish the second half had been as compelling. I read a lot of heavy stuff and can usually follow along without any problems but clearly, I missed something here.

Anyone want to clue me in? If so, email me.