Welcome to Moby Dick Monday! This is where we read four pages a day and then post about what we’ve read. Consider it an adventure of sorts!

Another short recap for the week. This one takes me through chapter 109.

I left off at chapter 65 last week so as you can see, I covered over 40 chapters but throughout all of these chapters, we are given yet another tutorial on the whale and its anatomy. Much time is spent on the precious spermaceti, which is the whale oil that is processed in such a way to produce a waxy substance that is used in many different ways.

Since whale oil is extracted form the sperm whale’s head, we are treated to a very involved description of the extraction process. I say ‘treated’ only because I found this portion of the tale fascinating. The crew straps the whale head to the side of the ship and then carves a whole into it to begin the extraction process. This oil is stored in barrels and to give you an idea on how much can be extracted…one large whale can produce as much as three tons of spermaceti.This oil is VERY valuable.

It is also within these chapters that a main member of the crew falls ill. He is overcome with fever and when he realizes that his time is limited, he plans out his burial. This particular member of the crew does not want to be tossed overboard, only to sink to the bottom of the black sea. Instead, he wants to be placed into a canoe and set to float across the ocean. The crew sees that his wishes are carried out.

Additionally, the carpenter carves a new ivory leg for Ahab after his ‘leg’ becomes compromised and begins to splinter. Ahab’s leg is carved out of whale bone (how fitting) and much of the chapter is spent discussing the differences of carving bone rather than wood. You see, when bone is filed it produces a very dusty, chalky cloud. It lines the passages of your nasal cavity and gets into your airways. It’s appropriate that Ahab, a man on a quest to find his white whale, literally lives and breathes whale…even if it’s in the form of bone dust.

I am attempting to pick-up the reading pace a bit so it would be wonderful if I could finish out this book this week. Although I am enjoying the technical aspect of the book, I am missing PLOT and character interaction.

Reading Along With Me:

Jill of RhapsodyinBooks
Dar of Peeking Between the Pages
Eva of A Striped Armchair (completed!)
Wisteria from Bookworm’s Dinner
Gavin from Page247
Claire from kiss a cloud
Sandra from Fresh Ink Books 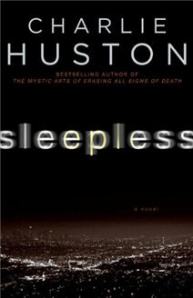 Friday Finds is hosted by Should Be Reading.

Here is the blurb from the publisher:

What former philosophy student Parker Hass wanted was a better world. A world both just and safe for his wife and infant daughter. So he joined the LAPD and tried to make it that way. But the world changed. Struck by waves of chaos carried in on a tide of insomnia. A plague of sleeplessness.

Park can sleep, but he is wide awake. And as much as he wishes he was dreaming, his eyes are open. He has no choice but to see it all. That’s his job. Working undercover as a drug dealer in a Los Angeles ruled in equal parts by martial law and insurgency, he’s tasked with cutting off illegal trade in Dreamer, the only drug that can give the infected what they most crave: sleep.

After a year of lost leads and false trails, Park stumbles into the perilous shadows cast by the pharmaceuticals giant behind Dreamer. Somewhere in those shadows, at the nexus of disease and drugs and money, a secret is hiding. Drawn into the inner circle of a tech guru with a warped agenda and a special use for the sleepless themselves, Park thinks he knows what that secret might be.

To know for certain, he will have to go deeper into the restless world. His wife has become sleepless, and their daughter may soon share the same fate. For them, he will risk what they need most from him: his belief that justice
must be served. Unknown to him, his choice ties all of their futures to the singularly deadly natureof an aging mercenary who stalks Park.

Not the type of book that I would normally pick up but this one sounds like a real page-turner. Plus, I seem to be on an “end of the world” kick and plagues and anything remotely about plagues seems to attract me these days. Wonder what that says about me? Hmmm.