It’s been a rough week. In the course of just a few days, The Boy was nominated for the Winter Dance royal court, removed from the ballot due to an administrative error, put back on for a re-vote, his “date” told him to go to the dance by himself, her friend slapped him (yes, she did), he found another date, lost the title to another boy, and then got hit with THE WORST stomach flu ever. Tough week for The Boy. Tough week for me. It’s hard to watch the drama without intervening or saying too much. 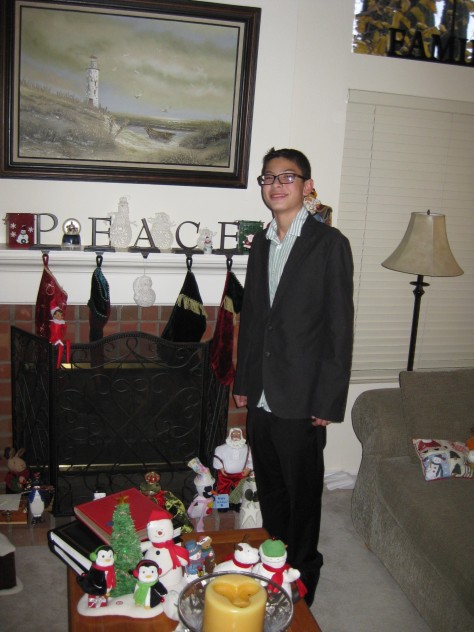 I was at a Christmas party when he got ready. Otherwise that shirt would have been tucked in for sure.

The corsage that he ordered and paid for with his own money. He’s twelve!

In between all of the tween drama, I’ve been thinking about the Indie Lit Awards. If you are a book blogger, and want to nominate a 2010 book for the award, be sure to stop by. Nominations close on December 15th. I am a judge for the Lit Fiction panel and I am looking forward to seeing which books make the shortlist. Since I need to read all five books by the end of January, I am going to be a reading fool.

As for “in-between” reading…

As of this moment, I know what I plan to read over winter break and I can take a guess on what I’ll be reading for the Lit Fiction shortlist, but what do I read now? In-between reading is sometimes a challenge. I don’t like books that are too light, but picking up A Suitable Boy, which I am trying to read in-between other reads is tough too.

I find that if I don’t pick-up something right away, that I end up picking nothing and just sort of do silly stuff like play Every Word on my Kindle. I think I may start Hating Olivia. It’s one of the few review copies I have that can be reviewed right away.

It’s a gorgeous day in So. Cal today. It’s expected to be about 70 degrees. The Boy is eating now and the fever is still hanging around but I hope to get out later and maybe hit the bookstore. I might make some Gingerbread cookies later, too. What do you have planned for today?