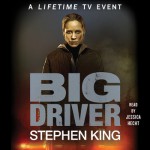 The kind of story you drop everything for. The kids can go hungry, but you’ve got to finish your read. You know the type I am talking about.

This little novella was actually part of a collection, originally published in Full Dark, No Stars by Stephen King in 2010.  But in case you haven’t noticed, King is on the popularity train right now. Many of his books and short stories have been adapted for film or TV or are in the works to be adapted soon and he has another new novel coming out this November, Revival.  I have some fun scheduled for that one.

Tess Thorne, a thirty-something mystery writer who lives at home with her cat, runs into a little bit of car trouble on her way home from a book signing. What she encounters is horrifying and every woman’s worst nightmare.

The story is riveting and at times, brutal. I listened to it on my way home from work, and every time I pulled into my driveway I walked into the house with my ear buds firmly attached because it was so hard to stop listening! King’s story is not that unique but there are things about it that creep you out. One, the main character creates voices for those around her, her cat, the librarian and the person she is most afraid of.

These imaginary conversations are very disturbing. More so, because Jessica Hecht’s interpretation is downright chilling. I can’t say that I enjoyed her speaking voice all of the time. Sometimes, the main character, who is supposed to be a thirty-something, sounds like an 80 year-old woman and that’s not just because of what the character goes through. Because of that, at times, I didn’t feel that her reading was true to the character.

King includes all the classic “King” stuff that keeps you coming back for more. The weird little sayings, “It likes you, and you like it.” Said, over and over until you feel like you are on the brink of losing it. The strange mannerisms and yes, the zinger cuss words here and there, coming out of the main character’s mouth. Lends the story a crassness that keeps you on the edge of your seat because you don’t know what the main character is capable of. Is Tess losing it? Holding it together? Giving up? Your heart will beat out of your chest until you know for sure.

This also counts as a R.I.P read.

As I mentioned above, so many King projects being translated for TV or the big screen. This is no exception. Big Driver is airing tonight, October 18th on Lifetime. Here is a little preview and if you miss tonight’s showing, you can catch it on Sunday, 10/19.

Source: Sent to me by the publisher.
Disclosure: This post contains Indiebound affiliate links.