Well, hello there! The holidays are always a bit crazy, but this year they came up too quickly for me. I had planned to be online for most of it and I was for some of it, but then the days got away from me and before I knew it, Christmas was here and then poof, it was over and done with. Isn’t that how it always is?

We did have some fun though.

We got there before the park opened and stayed for over sixteen hours. Towards the end of the evening, I was hobbled in a big way (like that guy in Misery), but we saw almost everything we wanted to. There is nothing like Disneyland at Christmas! I love the lights, the holiday atmosphere and who am I kidding? Starbucks! California Adventure has a Starbucks now! After sixteen hours of dragging myself all over the park, it felt so good to get a REAL coffee drink instead of the watered-down “tea” they call coffee.

Of course, there were other treats to be had such as the caramel apple and turkey leg I sucked down but I digress.

It was an amazing day. Bliss! I am a bit OCD when it comes to making sure we do stuff but all in all, it was a great day. Tons of people but our fast passes (strategically obtained) came in handy. I don’t think I’ve ever seen the Boy move so fast but he used those cross-country skills to get us passes for Radiator Springs Racers and it paid off because they were sold out by 11am.

On the Saturday before Christmas, we met-up with our friends for a driving tour of the Christmas lights in our neighborhood. We do this every year and have been doing it for well over fourteen years, if you can believe it. Anyway, I didn’t capture any pics because it was raining, but it was still fun to drive around and check out all of the lights. I made my giant ginger cookies and two kinds of fudge and we sipped hot chocolate while driving around. It was great to see everyone again.

On the Sunday before Christmas, we went to my Mother-in-law’s house. We got there a little late because I had a laundry faux pas but let me tell you… it was nice to be late for a change. We are always the first ones there and the party was in full swing when we got there. Felt good to arrive to a crowd of happy, smiling people. The food was great and everything was very casual and relaxed. A perfect evening.

Christmas day, I made cinnamon rolls and a pile of bacon. We watched movies at home and then headed to a restaurant for Christmas dinner. I ALWAYS cook and usually enjoy it but I was just sick of making stuff so this year, I made reservations instead. We like this one restaurant that is right next to the airport and they offered a Christmas buffet this year so I thought, why not? 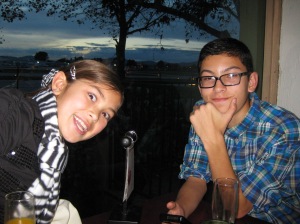 I think each kid ate their weight in food. The sun was setting in this pic but that’s the air field right there! We got to watch the planes take-off and land while we ate. It was perfect and a lot of fun. I especially liked the fact that there was nothing for me to clean-up afterward!

After dinner, we drove home and watched It’s a Wonderful Life. A perfect end to a perfect evening.

I think everyone on the planet was watching this movie though: 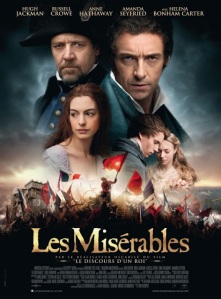 My son got to see it with friends but I seriously feel as if I need to get myself to a theater to see it.

Anyway, that’s it from me. I just started my last book of the year, Hard-Boiled Wonderland and the End of the World (Murakami) and tomorrow, I plan to just lounge around and do nothing. I do have two reviews to write-up. We’ll see if that happens.

A story about a weird, modern family wading through love as they know it.

Maxon is a Nobel Prize winning scientist on a mission to colonize the moon. The robots he’s created for the purpose are lifelike in that they can talk and interact just like humans. Back on Earth, his wife Sunny raises their 4-year-old autistic son, Robert (Bubber) and awaits the birth of their second child. When communication with the capsule is lost due to a meteor hit,  both are left to ponder the lives they’ve lived and the mistakes they’ve made along the way.

Sometimes you read a book and then sometimes you experience one. This book is full of moments and experiences so unlike my own, that it’s a hard book to describe. The characters are quirky but in an odd way. Not a fun way. For example, Sunny was born hairless. No eyebrows, no eyelashes. At first, she covers it up with wigs and custom hair pieces, but when she loses communication with Maxon, she decides to leave herself unadorned for the world to see. During all of this, Sunny’s mother is also on her deathbed, connected to tubing and not able to breathe on her own. The tethers of life in both her mother’s situation and Maxon’s are failing in a big way, and Sunny is slowly coming unglued.

Maxon, on the other hand, is the more stable of the two or so he appears to be. His ability to become detached or distant, is a plus when his mission is jeopardized.  His ability to think clearly in times of crisis is admirable, yet also a bit disturbing given that he has so much to lose. Hyper focused or positive attitude? You never really know with Maxon. It’s almost as if he’s one of his robots. Calculated. Precise. Dependable. Reliable. As most of you may have guessed, this also equals, boring.

It’s clear from the beginning that Sunny is resentful of the life she’s lived with Maxon. Although Maxon is a very successful scientist, Sunny’s mother begged her not to get involved with him when he fell for her as a child. The two as children, seemed to be connected and although they went about their lives with school and college, that connection was never lost. However, in the real world of raising an autistic child, struggling with the day-to-day “hassle” that has become her life, Sunny finds herself  frustrated and worried that her next child will also be autistic and where is Maxon in all of this? In space.

I did not enjoy this book while reading it, but in hindsight, there are things that I appreciated about it afterward. The feeling of loss and isolation for both Maxon and Sunny is really quite well done and necessary since both characters are not terribly verbal in expressing their thoughts.

In summary, the book left me a bit cold. The characters, all of them, lacked warmth and understanding and the second half was rather difficult to get through. I don’t need warm, likable characters to like a book but I need to feel a pulse and the characters were a little too “out there” for me. I never really understood where they were coming from and in turn, didn’t really care where they were headed.

I will say this, there are some beautiful lines. Lines in which I read two, three and four times for their beauty. This is Netzer’s debut novel and although ultimately it didn’t work for me, I’d absolutely give her writing another try.

Source: Sent to me by the publisher via Net Galley.
Disclosure: This post contains Indiebound affiliate links.