I raise one fist (male typically) and begin to beat on the walls of my eggshell until it cracks. Then, slippery as yolk, I dive headfirst into the world” (211).

Middlesex by Jeffrey Eugenides is about Cal Stephanides. Cal is a hermaphrodite and it’s through his narration that we learn about 5-alpha-reductase deficiency and how it affected his development. Cal begins his story in the present day and then takes us back to the beginning, where his grandparents, Lefty and Desdemona make a decision that will forever change his life.

I hesitate to go into too much detail as there is so much to be discovered in this book, and those discoveries should be made by you, at your own pace. What I can say, is that Middlesex blew me away. It’s a complex, meaty type of read but the best kind of read…one told with humor and a definite voice.

It’s epic in scope but remarkably readable. The themes of identity, re-birth, transformation, race relations and nature vs. nurture are balanced out with humor and characters that breathe the same air we do. These themes speak to everyone, which is probably why Middlesex won the Pulitzer for fiction in 2003.

I read this novel for my Contemporary Lit class and it was well-received by everyone. Even the non-readers in the class had something to say about this book and although I finished it weeks ago, I am still re-reading passages. It’s definitely one of my faves for 2010.

If this novel escaped your radar when it first came out, I urge you to pick it up now.

Atonement is a multifaceted little gem of a book.

During the summer of 1935, Briony witnesses an encounter between her older sister Cecilia and a boy named Robbie Turner. Briony’s interpretation of the event and those thereafter, lead her to tell a devastating lie. As time passes, the realization of what she’s done leaves her desperate for redemption and forgiveness which only the absolute truth can bring.

I love this book. I first read it years ago for book group but recently re-read it for the class I am taking. In class, we took several weeks to discuss it and let me tell you, it was quite a treat to have that much time to discuss the book. This is one of those books that is a bit of everything. There’s a love story, betrayal, the loss of innocence, war and the whole theme of atonement itself…it’s just so rich. So full.

As you read, your thoughts go one way and then another. McEwan’s attention to detail was tiresome for some, but for me?  I lapped it up. The setting and the characters were easy to picture in my mind and I found that I could relate to several of the characters at once.  A young girl, living in a huge house out in the English countryside tells a lie that can’t be taken back. How can you resist that?

Atonement is considered by many to be McEwan’s best work. It was shortlisted for the Booker Prize in 2001 and this is one case where I can totally understand why.

In class, we watched bits of the movie which came out in 2007  and starred Keira Knightly and James McAvoy. 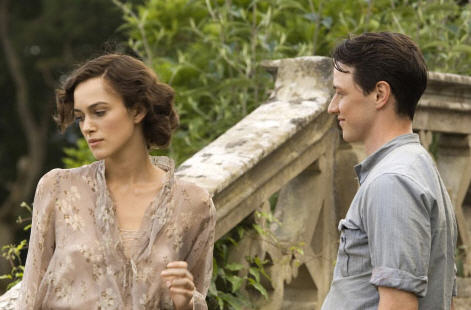 The parts that I saw were wonderful and really did the book justice. Makes me want to see the entire film now.

If you have a copy of Atonement lying around, I encourage you to pick it up and read it and if you don’t have a copy, you might want to get one. It’s one of those books that will make you love reading all over again.