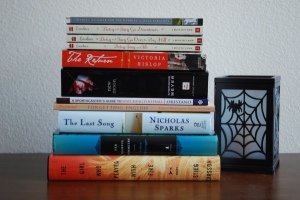 Here’s what I plan to read for read-a-thon next week:

I tried to mix it up a bit. There is some short stuff and some non-fiction stuff, so in between the heavier books I’m sure I will pick those up. Since The Hub will be out of town, I need to plan my food beforehand. Not just my food but food for the kids too because my little one is a round-the-clock-snacker. I’m looking forward to it though! I can’t wait to catch-up and get some of these read. Right now I’m working on my posting schedule. Last time, I felt as if I was on the computer all the time. Either I was posting an update or responding to the cheering squad. This time I want to spend the majority of my time reading. 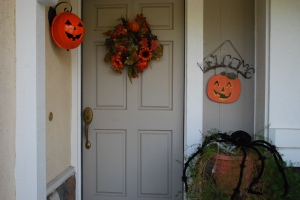 Last week we had two steady days of rain and rain out here is a huge deal because we never get rain and we’re in a terrible drought. However, yesterday was 98 degrees and today is supposed be right around 85 0r so. I’ve been doing everything to convince myself that the season has indeed changed though. I got some of the Halloween stuff out. I made a delicious Carribean Pumpkin Coconut soup for a book review that I am doing. I will share the recipe if the publisher allows it. I have pumpkin bread in the oven, Swedish meatballs in the Crock Pot and I have been drinking spiced apple cider as if it’s going out of style. It’s not working though, it still feels like Summer here!

Last night I pulled out all of the books that I plan to read for the 24-Hour Read-a-Thon. I’ll post the list tomorrow but it was hard to decide and I don’t think that I stuck to my rule of “keep them short.” How many times did your list change before you actually posted it? Mine has changed three times!

I got to sleep in until 9am this morning which is totally unheard of! My son got into trouble yesterday and he offered to get up with his sis this morning. He made her breakfast and they were watching a movie when I stumbled down the stairs. The Hub is at work so we may hit yet another Halloween store to buy more stuff for the house. My little one is really into Halloween this year and she wants more stuff to put on the house. We are actually going to a Halloween party on the night of Halloween so I don’t want to get too much stuff since we won’t even be here.

This past week was sort of a slow reading week for me. I finished and reviewed The Girl with the Dragon Tattoo (loved it) and I just finished Of Bees and Mist last night and will probably post the review on Tuesday. I also posted another Confessions of a Reader post. Thanks to all who participated. Right now I am going to pull the pumpkin bread out of the oven, have another glass of spiced cider, take a shower and begin my day.

What do you have planned?

Sent to Me by the Publisher: