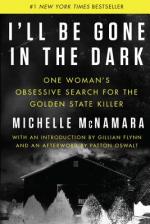 A matter-of-fact investigation of the East Area Rapist, better known as the Golden State Killer, as told by one obsessed journalist, her husband and team who finished the book after her passing in 2016.

You might not be familiar with the Golden State Killer. He is responsible for the murders of thirteen people, over fifty rapes and numerous burglaries in California from 1974-1986. His reign of terror began when I was seven years old but I have no recollection of him in the news. This could be due to the fact that at first, he was called the East Area Rapist. Not a name that stuck. Not a name like The Hillside Strangler, for example. When journalist Michelle McNamara became obsessed with the case, she renamed him the Golden State Killer and this is when he began to get more press.

The Golden State Killer left a path of evidence and clues but the science behind DNA analysis wasn’t quite there yet and no DNA databases existed in those early years to help with the investigation. McNamara, a true crime fan and creator of True Crime Diary, began to look into the case, thinking that crowd-sourcing might be a way to gain new information.

Years and years of research led to a book deal but the publisher knew that a book about an unsolved case could be risky given that the guy could still be caught. And caught he was, but not before McNamara, who spent years following his trail, passed away accidentally from a lethal combination of anxiety meds and an undiagnosed heart condition. What became more risky is that Patton Oswalt, a comedian and husband to McNamara, vowed to complete the book using the notes she left behind.

The book itself is pretty well-written. The parts that McNamara wrote, are to-the-point and brief but I felt that something was lacking. Emotion? Passion? She was obsessed with this guy but to me, it didn’t come through in her writing. However, there is something to be said for her matter-of-fact style. I was glad that the more grisly details, as there had to be many, were not shared on the page. I viewed her take of the case as a removed, detached view of someone on the outside looking in. This was strange to me because towards the end of the book, it’s revealed that she had boxes and boxes of files and evidence at her disposal. What she chose to share was minimal, in my opinion.

The other part that was lacking, is that we never got to know the killer because he had not been caught yet. A lot of assumptions were made, and so many of them were wrong. The Golden State Killer was arrested in 2018 after a DNA match was found. Even now, we know nothing about him or why he did what he did or even why he stopped his spree.

Although it may sound as if I did not like the book, I actually did but it wasn’t what I expected it to be. The parts that were pieced together by Oswalt and others are clearly marked. The book doesn’t pretend to be something it’s not. There is an authenticity to the writing that I appreciated. It’s definitely a mix of memoir and true crime but perhaps a slightly deeper dive in either direction would have made it more compelling.

As a book club pick, there was a lot to discuss. We talked about the issue of privacy, why true crime is more appealing to women than men, common characteristics in serial killers, and the structure of the book itself.

If you like true crime but don’t want to read anything too gruesome, there are no worries here. Details of the actual attacks are kept to a minimum. You are given just enough to set the tone but nothing more than that.

Have you read the book? Have you heard of the Golden State Killer? Apparently he goes to trial in August 2019. They are seeking the death penalty although our governor recently nixed the death penalty in California. Not sure how that is going to work plus many of the rapes are beyond the statute of limitations now.

An HBO series on I’ll Be Gone in the Dark is currently filming but there is no expected release date listed.

9 thoughts on “Review: I’ll Be Gone in the Dark”