A number of things took place this week that threw my little family into a bit of a spin. To put it in perspective, nations were not destroyed or anything but it was just one thing after another.

Today, I am at church pretty much all day long. We are hitting the service, then a special event, then The Hub is hitting another special event off-site and then The Girl and I will have a short break to pick up her friend and then we are back at church for the middle-school ministry. Did you catch all that?

Dental appointment, choir concert, volunteering, track rehearsals, first track meet on Saturday and it’s an away meet,  and then a Humans vs. Zombies food drive right after, at the church! It will be a full week but also an exciting week because there is some fun in there.

I finished Toni Morrison’s God Help the Child for book club and it was pretty good. Some said it was not her best work. However, I found it to be a very interesting read. It was a good discussion.

I am so close to finishing The Nakeds. Honestly, I thought I HAD finished it before starting my book club book but then when I tried to write the review I couldn’t remember the ending. Well, that’s because I have about 5% left! I don’t know why I thought I was done.

I just started Gold Fame Citrus and it’s also proving to be a very interesting read. It’s HARD though because it’s about the drought in California and although we are not quite as bad as what is depicted in the book, we will be there soon if we don’t get measurable rain.

I haven’t had much time to hang out on the couch with Netflix but I have been keeping up with The Walking Dead. It’s so good! I am really hoping we don’t lose Glenn this season. Everyone is talking about the finale and how it might be THAT scene from the comic that we are all dreading. I certainly hope not. I can think of one other way it could be even more horrible and I am hoping the story doesn’t go that way.

I dragged my butt to the market yesterday to get it done before the big storm hit. Well, we had some rain but a big storm? Nope. But, we will be throwing pork chops on the grill later and have them with scalloped potatoes, collard greens and corn. 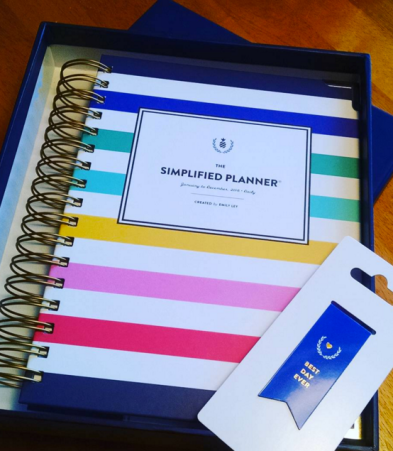 My planner. I bought a Simplified Planner this year and I can’t tell you how much I rely on it to keep me together. It’s a daily planner which I don’t think I use to its full potential, but it’s been a real life-saver this year.

What’s going on with you today?

20 thoughts on “Sunday Matters: It’s Been a Trying Week”