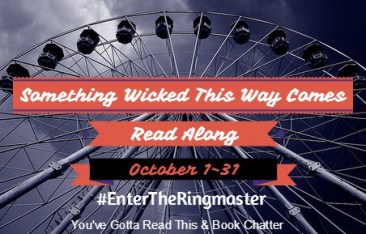 Our read along for Something Wicked This Way Comes is in full swing! By today, 10/10, we should be wrapping-up part one, Chapters 1-24. What do you think so far? Here are my thoughts and then I have some questions for you to ponder:

Now, a couple of questions for you from Shmoop.com:

Everyone on Twitter (#EnterTheRingmaster) has mentioned the narration. It’s a little odd. One blogger said the flow was a little difficult to pick up, but once she got over the hump, she was totally into the story. For me, the third-person narration is not an issue but the language, prose, whatever you want to call it, was a little disjointed at first. It did kind of add to the story though because it felt to me as if I was listening to someone from another part of the country. How close is the narrator to the boys? I’d say pretty close, almost too close because I am having a hard time keeping the two boys separate in my mind.

The target audience? Good question. Although the main characters are young boys, I’m not sure that’s the intended audience. There is something going on with Will and his father, something that maybe only an adult can appreciate. There is the whole old versus young thing too. I’m not sure a young person can appreciate youth when they have it. Do you?

My feeling right now is that the fun is just beginning. Part one dealt with the arrival of the dark carnival and part two is titled Pursuits.

If you want to still join us, it’s not too late. It took me one sitting to read through chapters 1-24. The biggest challenge will be finding a copy.

Next up on the schedule?

If you wrote-up a post, just add the link in comments or feel free to comment away here or on Twitter using #EnterTheRingmaster as the hashtag.

13 thoughts on “Something Wicked Read-Along Update – Part One”