This post is coming to you a little late. We had a very full day at the track yesterday. It was The Girl’s first meet of the season and it was an away meet, at a school that happened to be hosting for the very first time. Let me tell you, the people were so incredibly nice but it went on for twelve hours!! My two-hour volunteer block stretched into nearly six hours because no one else showed up. And as you can see, by the end of the day, people left with their kids because it was just way too long of a day.

That is The Girl in front, doing her thing.

The upside, is that The Girl was awesome but had a  huge spill, during the 100m. At first, I didn’t think she was able to get up because she hit the turf full force at full speed, but she managed to pull herself together and finish the race. It was horrible to see! She was going so darn fast when she did it.

What you see below is just one of the injuries. She basically took out her entire left side and although she is somewhat smiling in this photo, she was definitely not smiling this morning. I am just so darn glad she got up and finished the race. The crowds in the stands, the stands were actually full for that race, stood up and cheered her on. I was so glad to see the opposing teams cheering her on too. I was so sure she was going to be carried out on a stretcher because when I say she hit the ground hard, I mean it.

Doesn’t she look like a little bad ass Daryl Dixon in this pic? The Walking Dead fans, will chuckle at that She is my little ass kicker. 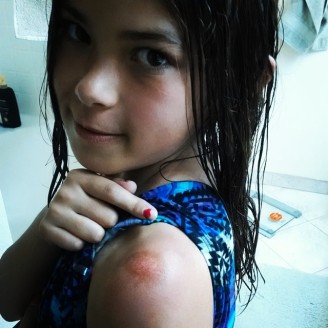 But after a day like yesterday, none of us wanted to go to church this morning because after twelve hours in the sun and heat, we just couldn’t think of getting up but of course we did. So we dragged our sorry butts to church and enjoyed it quite a bit.

Later this week, we have track practices, Jazz Pop rehearsals for choir, open house at the high school and that biopsy that I mentioned in a previous post which I am really, truly dreading. Wish me luck.

What am I reading?

I am not sure if I will ever finish Orfeo. It started off strong but it’s been painful reading a few pages every day, to just get through it. I may give it up. I started The Museum of Extraordinary Things which is pretty good so far. Still trying to get through Life After Life. Very slow but the story has picked up a tiny bit.

Oh, and I finished Me Before You. There are no words. I wish I had not waited so long to read it.

What am I cooking?

Today was one of those “hungry” shopping days. The weather has been glorious so we hit the market after church to pick up something to grill. We ended up with steak, salmon and chicken! Everyone wanted something different so whatever doesn’t get eaten, will be the stuff of salads later this week. We are also having baked beans, corn on the cob and baked potatoes! Yep, a “hungry” shopping day for sure

What am I watching?

Well, I had to stop watching Lost at lunch because The Girl wants to watch it with me now so all that I have been watching lately is The Walking Dead and Bates Motel. Both, too good to miss so my Sunday and Monday nights are pretty set. I wanted to squeeze Catching Fire in there this weekend but it didn’t happen, and won’t. I am about to crash on the couch for a much-needed nap and that is all I can think about at the moment.

What did you do today? Reading anything good?

19 thoughts on “The Sunday Salon: The Overflowing Calendar”