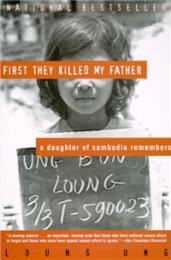 A young girl’s heart wrenching tale of her family’s struggle for survival during the Cambodian Genocide (1975-1979). Hard to stomach at times but beautifully written.

Ung’s tale begins in Phnom Penh, Cambodia. Once known at “the pearl of Aisa”, Phnom Penh is the home of the Ung family which consists of her mother and father, and her siblings, Meng, Khouy, Keav, Kim, Chou, Loung (the author) and Geak. Life in Phnom Penh is quite pleasant for Loung. Her father (Pa) works for the government and is highly respected in the community.  Due to his class standing, they live in a nice house and Loung’s mother (Ma), does not need to work. However, as the Khmer Rouge invade Cambodia, the Ung family is forced to leave their home. This is Loung’s story of what happened to them on their way to Thailand.

As you can imagine, this is a very tough story to read. Loung is so young when her family is forced to move. She is only five-years old. Caring for her younger siblings and sometimes even the older ones, must have been very tough for her. As her family makes their way from one work camp to another, their fight to stay alive becomes more difficult as food rations dwindle, and violence abounds all around them.

This is from page 149/50 of the paperback. Loung is referring to her younger sister’s emaciated body:

My eyes stay on Geak. She does not talk anymore. She is so thin it is as if her body is eating itself up. Her skin is pale yellow, her teeth rotten or missing. Still she is beautiful because she is good and pure. Looking at her makes me want to die inside.

Ung’s story is quite compelling. Her relationship with her father comes through as being strong and solid, so much so, that when the soldiers take him away, her world falls down around her. Since it is impossible to know exactly what happened to her father, she fills in the gaps with visions she has of the event. These visions seem plausible and serve as closure for her, and I found them to be quite effective. She uses this technique again towards the end of the story and although I saw it coming, it was just as effective and shook me to the core.

What was particularly poignant for me, were her memories of life in Phnom Penh. The clothes they wore, the food they ate. She never realized how good she had it until all of it was taken away. Those moments seemed so small to her at the time, but in reflection, they end up being the cement that holds her together.

My book club chose this book for May. We meet to discuss it next week. I didn’t know too much about the Cambodian Genocide before reading it. Although it is a tough read and hard to stomach at times (it took me a really long time to finish), I am glad I read it. I would recommend it to anyone who wants to know more about this topic.

16 thoughts on “Review: First They Killed My Father”

For a Publicity Tour: