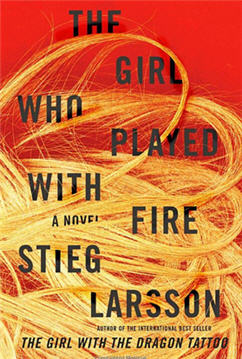 The blurb from the publisher:

The electrifying follow-up to the phenomenal best seller The Girl with the Dragon Tattoo, and this time it is Lisbeth Salander, the troubled, wise-beyond-her-years genius hacker, who is the focus and fierce heart of the story.

On the eve of publication, the two reporters responsible for the story are brutally murdered. But perhaps more shocking for Blomkvist: the fingerprints found on the murder weapon belong to Lisbeth Salander.

After reading The Girl Who Played with Fire you’ll need a nice manicure as it’s quite a nail biter! Tense at times with a very quick pace, this one will keep you on your toes.

This is book #2 in the Millennium series and after reading and reviewing The Girl With The Dragon Tattoo, I knew I had to pick this one up quickly and that’s exactly what I did. Those that love the character of Lisbeth Salander will be happy to know that book #2 focuses on her and her story but when two journalists are murdered and Lisbeth is the prime suspect, she goes missing for quite a while and in fact, is not in a large portion of the book! I know! Scandalous!

As law enforcement gathers the evidence, Mikael Blomkvist and his staff at Millennium, try to put their own case together to find the real killer. As they conduct their investigation, additional details surface and the reader is given a very private glimpse into Salandar’s life. To be honest with you, I found myself frustrated with this portion of the story. I wanted to know what happened but it seemed as if so much time was spent on the forensic stuff. Yeah, I know that you sort of have to do that to solve a case but in the mean time, Salander is missing and you just want to know where she is and if she did it.

I was also slightly annoyed with the whole Giant thing. There is a Giant. A big, huge guy that is impervious to pain. It reminded me of that movie from the late 70’s, Foul Play. You know the one. It has Chevy Chase and Goldie Hawn (good movie by the way). In that movie, she references a dwarf and she is given the warning “beware of the dwarf.” This was sort of like that. BEWARE OF THE GIANT LISBETH! I tired of the Giant.

We also get to know Mikael Blomkvist a little better but he is still the man with all the women! How he manages to bed these women and then remain friends with them afterward is beyond me. In real life I wouldn’t think too highly of someone like him, but for some reason he comes across as ‘okay’ in the novel, sort of an “Everyman” character which is really sad if you think about it.

However, even though I had some nit-picky moments with this one, I still enjoyed it quite a bit. It took off right out of the gate and kept going and it didn’t disappoint in the end. It all came together and left me feeling completely wrung-out and incredibly anxious for the next book. The Girl Who Kicked the Hornet’s Nest is not available here in the U.S. but you can get it from The Book Depository and they have free shipping worldwide! However, they are now out of stock on the paperback so I will have to check back later.

18 thoughts on “Review: The Girl Who Played With Fire”