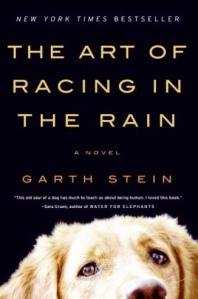 The blurb from Barnes and Noble:

Enzo knows he is different from other dogs: a philosopher with a nearly human soul (and an obsession with opposable thumbs), he has educated himself by watching television extensively, and by listening very closely to the words of his master, Denny Swift, an up-and-coming race car driver.

Through Denny, Enzo has gained tremendous insight into the human condition, and he sees that life, like racing, isn’t simply about going fast. Using the techniques needed on the race track, one can successfully navigate all of life’s ordeals.

On the eve of his death, Enzo takes stock of his life, recalling all that he and his family have been through: the sacrifices Denny has made to succeed professionally; the unexpected loss of Eve, Denny’s wife; the three-year battle over their daughter, Zoë, whose maternal grandparents pulled every string to gain custody. In the end, despite what he sees as his own limitations, Enzo comes through heroically to preserve the Swift family, holding in his heart the dream that Denny will become a racing champion with Zoë at his side. Having learned what it takes to be a compassionate and successful person, the wise canine can barely wait until his next lifetime, when he is sure he will return as a man.

It must be said. I am not a dog person. I was raised with cats from the time I was born so I understand cats and I get their stand-offish aloofness. However, when my son was four-years old, we rescued a dog from the shelter. He was an Aussie/Golden mix and he looked a lot like the dog on this cover, but he was gray and he was huge, and his eyes were light gray, but apart from that the expression is the same.

We had no idea what he had gotten ourselves into. My cat did (figures). Needless to say, it did not work out but we insisted on making it work and then the poor thing had a heart attack and passed away. Why do I tell you this? Well, because I really wanted to have the relationship with my dog that others had with theirs. Is it possible for a cat person to become a dog person?

As I was reading the book. I began to yearn for a dog again. Enzo, is the dog of all dogs and the type that I would like. He is human-like and always thinking and it made me question if dogs, as a breed, are like this all the time. At first, I didn’t get the racing part. Car racing is not my thing, but as the story progressed, and Denny’s love of racing became Enzo’s love of racing, I began to like it more.

I loved that the story was told from Enzo’s point of view. I loved the descriptive passages about the various scents piquing Enzo’s curiosity. Those sections seemed very genuine to me. As if that is exactly what a dog would think, given that particular situation. The loyalty that Enzo felt towards his family was very touching at times.

I would have liked to have seen Eve’s character developed a tiny bit more and I could have done with a little less race talk, but the end brought it all together for me so I was satisfied with how it all worked out.

It’s not a spoiler, since it’s mentioned in the synopsis that Enzo does eventually pass but when he does, his death is handled so well by Stein that I actually stopped breathing. When my beloved feline friend passed away after almost seventeen years, he died in exactly the same manner as what Stein described in the book. It gave me chills.

Overall the book left me with a warm feeling and although it did bring back memories of my animal friends, they were all good memories and it was like taking a walk down memory lane. I decided to include of picture of the the dog that we had for only four months. He was just a puppy. His name was Mobley.

I won this book in a Twitter contest that Jennifer over at Book Club Girl was hosting. Jennifer is hosting a Blog Talk Radio show with Garth Stein on July 22nd. For more information on the show, click here. I can’t wait!

23 thoughts on “Review: The Art of Racing In The Rain”