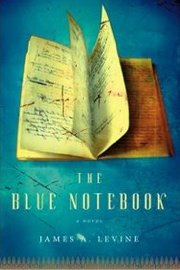 The blurb from Barnes and Noble:

Every now and then, we come across a novel that moves us like no other, that seems like a miracle of the imagination, and that haunts us long after the book is closed. James Levine’s The Blue Notebook is that kind of book. It is the story of Batuk, an Indian girl who is taken to Mumbai from the countryside and sold into prostitution by her father; the blue notebook is her diary, in which she recalls her early childhood, records her life on the Common Street, and makes up beautiful and fantastic tales about a silver-eyed leopard and a poor boy who fells a giant with a single gold coin.

An unsettling story about a nine-year-old girl that is sold into prostitution by her own family. Deeply disturbing at times and extremely graphic. This one is hard to stomach.

What struck me about this novel was not the shocking content (surprisingly). What struck me, is that the story was so beautifully written. The content is dark and gritty yet the prose is so alluring that it pulled me through the story even when I didn’t want to read anymore. For this, I would recommend the book.

However, I did have some issues with where the story went. I won’t give anything away, but I felt that the story took an unrealistic turn. I believed the street scenes and her time in “the nest.” This felt genuine to me and I wanted to know more about the other boys and girls who lived with her, especially Puneet. I was also intrigued with the Orphanage and the characters within it, but I felt that her time there was short and then the novel seemed to shift abruptly for me.

I know that there is a hardening that takes place when a child is forced into prostitution. They either grow a tough shell, or they cave and fall apart. Batuk does not cave. She learns to play the game but towards the end of the novel I tired of her. I think I was sickened by her playing the game. Her manipulation at times was necessary for survival but it presented a different side to her, one that I didn’t care for.

A good example of what I am trying to convey is that Puneet had the same life. He had the same horrible things happen to him, yet he never lost his child-like demeanor. I suppose in a real life situation, a child would do whatever they needed to do in order to adapt, but it bothered me.

One important item to mention is that Levine is donating the U.S. proceeds of this novel to the International and National Centers for Missing and Exploited Children.

This book was kindly sent to me by Alyce over at At Home With Books.

20 thoughts on “Review: The Blue Notebook”