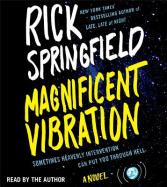 A very weird, mixed-up story about a guy’s conversations with God. I think.

Where do I start? This is quite possibly the worst audio book I’ve ever listened to. I’m not sure what I expected when I discovered that Rick Springfield had written a novel, but what played out before me was like smoking some bad weed and then being over taken by fumes of an unknown variety. My eyes watered. My ears hurt. I kept telling myself, it’s Rick! It’s got to be good. I mean, I love the guy. I have loved him since the 80’s. I loved him through his stint on General Hospital and I still think he’s right up there musically. But writing? Not his strong suit.

The story is about a guy named Bobby. He steals a self-help book titled Magnificent Vibration. Inside, he finds a 1-800 number and calls it. When the guy on the other end answers and introduces himself as God, an interesting conversation takes place. Bobby then hooks up with a sex-pot named Alice and the two head off on an adventure.

I got through two discs and between those discs, I think the main character mentions masturbation, I don’t know, at least twenty times and Springfield’s use of colorful expressions to represent the act was impressive. But putting all that aside, the story is all over the place. I listened to those two discs uninterrupted and had to go back a few times to figure out what was going on. There is a little bit of humor in between the gritty bits but overall, the story, the reading (slurred words, poor attempt at an accent maybe?) were just too much for me to keep going.

I’ve been told that I have a good sense of humor and can be a little sarcastic at times so I get the sarcasm and the jabs and all that, but the dialogue was really what made this difficult to listen to. Perhaps it plays out better in print, but I doubt it.

If you’ve read the book or listened to the audio, I’d be interested in your opinion on this one.

Source: Sent to me by the publisher.
Disclosure: This post contains Indiebound affiliate links.