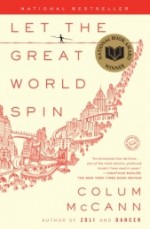 Here’s the blurb from the publisher:

Corrigan, a radical young Irish monk, struggles with his own demons as he lives among the prostitutes in the middle of the burning Bronx. A group of mothers gather in a Park Avenue apartment to mourn their sons who died in Vietnam, only to discover just how much divides them even in grief. A young artist finds herself at the scene of a hit-and-run that sends her own life careening sideways. Tillie, a thirty-eight-year-old grandmother, turns tricks alongside her teenage daughter, determined not only to take care of her family but to prove her own worth…

Let the Great World Spin is a spectacle of sorts…a visual romp through 1970’s New York where the lives of many come together in unusual ways.

Let the Great World Spin is a collection of stories. Did you know that? I did not. However, the stories are told from several different points of view, and although each character has a very distinct voice, the stories eventually collide with one another leaving the reader standing there, wondering who or what comes next.

Something terrible happens, and as the chain of events unfold, we view the same event from different perspectives. It’s as if the world is spinning in slow motion, and we are forced to look at the bits and pieces that are not normally noticed when time moves at a  more normal pace.

There is something that happens to the mind in moments of terror. Perhaps we figure it’s the last we’ll ever have and we record it for the rest of our long journey. We take perfect snapshots, an album to despair over. We trim the edges and place them in plastic. We tuck the scrapbook away to take out in our ruined times.

Many of these characters are flawed. They are striving for something, and often find themselves on the outside looking in. As they observe the world around them, life as we know it, continues on. As I read this book, I was mesmerized by the author’s ability to take me in and out of a character’s head. One story is told from a prostitute’s point of view, and as I was reading her story, I felt what she was feeling, the frustration, the loss, the helplessness. It was a lonely place to be.

I know I haven’t said much about the plot, but as you can imagine, when something terrible happens, there is a downward spiral that takes place. As things come crashing to a halt, there is no place to go but up. This book is like that. We take the plunge into despair, visit with these characters awhile, and then we’re given a small glimpse of what lies ahead. To me, the the plot didn’t really matter. I was so absorbed the the internal conflict within each character that plot was secondary to me.

It has a quiet, understated quality to it that I wasn’t expecting. The characters are complex and conflicted and even though some of them may not be the type of people I’d be friendly with, I could relate to many of them. This is the type of book that you can re-read, and see  (and feel) something different each time you pick it up.

I know for some readers, the varying perspective was a source of confusion at times, but once I figured out where the author was going, I had no problem with the different viewpoints.

Let the Great World Spin will be on my list of faves for 2010 and was a National Book Award winner for 2009.

Source: A big ‘thank you’ to TLC Book Tours for asking me to be a part of this tour and to the publisher for providing me with a review copy of the book. 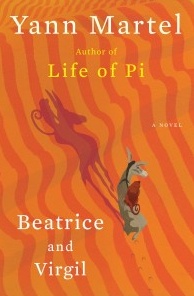 Here’s the blurb from the publisher:

When Henry receives a letter from an elderly taxidermist, it poses a puzzle that he cannot resist. As he is pulled further into the world of this strange and calculating man, Henry becomes increasingly involved with the lives of a donkey and a howler monkey—named Beatrice and Virgil—and the epic journey they undertake together.

With all the spirit and originality that made Life of Pi so beloved, this brilliant new novel takes the reader on a haunting odyssey. On the way Martel asks profound questions about life and art, truth and deception, responsibility and complicity.

Innocent at first, Beatrice and Virgil leaves a dark smudge on a seemingly white page. It’s disturbing and odd and I have to say it…brilliant.

This book blew my mind.

Henry the writer, meets Henry the taxidermist but the taxidermist is also a writer and has written a play about a donkey named Beatrice. and a howler monkey named Virgil.  Beatrice and Virgil have long discussions about life, both the good and the bad but there’s a problem. The taxidermist needs the writer’s help in completing the play as the characters are not as fully fleshed out as they could be.

This passage appears on page 80 of the ARC that I have:

Henry: Off the top of my head, without any preparation or much thought, I’d say Virgil has the pleasing dimensions of a smaller dog, neither too bulky nor too slight. I’d say he has a handsome head, with a short snout, luminous reddish-brown eyes, small black ears, and a clear black face—actually, it’s not just black—a clear bluish-black face fringed with a full, elegant beard.

Taxidermist: Very good. Much better than what I have. Please continue.

The play continues to unfold in this manner. The taxidermist tosses out  a bit of info here and there and Henry the writer, takes it all in, provides help when he can and finds himself completely obsessed with the stuffed animals that this play centers around. Additionally, Henry the writer recently wrote a book of his own that bombed in a big way so helping in this manner is sort of like writing, but not.

I won’t say much more about the plot as you must experience it on your own, but it touches on the interaction between humans and animals, humans and other humans and the fact that evil comes in all forms. Once you figure out what is going on, and where the story is going, you continue to turn the pages with dread but somehow find yourself unable to stop. Martel dangles the carrot so to speak, and you can’t help but take a nibble.

I’d like to warn you that although this book is not overly graphic, it is disturbing and dark and will leave you feeling overwhelmed with emotion. After reading it, I immediately deemed it brilliant but then felt silly for saying so, as I’m not sure the author’s intent was to write something brilliant. I know that sounds odd because most writers probably strive to be brilliant, but it’s so subtle. Whether that was the intent or not, it WAS brilliant and odd and different from anything I’ve ever read. Beatrice and Virgil will be on my list of favorites for 2010.

Beatrice and Virgil officially comes out on April 13, 2010 but you can pre-order it now.

Source: This ARC was sent to me by Random House via Shelf Awareness.