Today, The Teen had a birthday! He’s eighteen which is almost impossible for me to believe. We had a lot planned but much of it was affected by the #sandfire, which some of you may have heard about. So far, it’s burned about 30K acres. 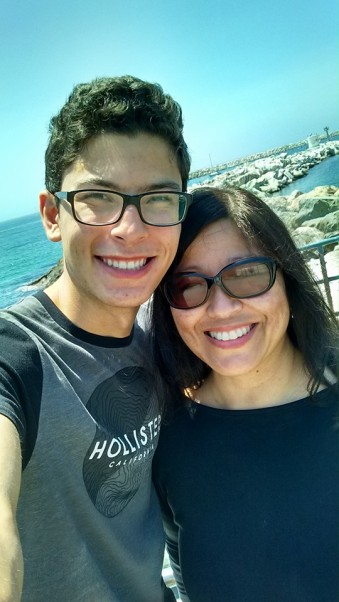 On Friday, we saw Cabaret which was hauntingly excellent. Seriously, one of the best shows I’ve ever seen. Saturday, we had planned to see a concert at the park but it was cancelled when the fire took a turn for the worse. This is how the sky looked (no filter). 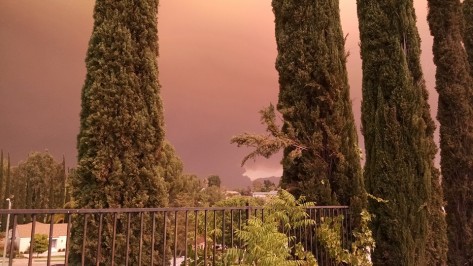 Today, the sky was better so we headed to the beach but got stuck in traffic when the freeway closed due to the fire changing direction. We still managed to have a nice dinner but with so many friends affected by the mandatory evacuations our minds are with them and the numerous fire crews working this fire. Plus, there are a lot of ranches in the area so the safety of the animals is also a concern. After three days you’d think there would be some improvement but the drought has made the hillsides so vulnerable.

We are home safe and watching the news and just praying for everyone. I am not sure about work tomorrow. I only have one way in and out and right now, that area is not looking good.

Not too much going on but there are a couple of fun things planned. We have a pool party one night and a college “going away” party on another night.

This is my summer of reading. I’ve read so many good books. I am currently reading End of Watch by King. I was late to the party but that’s okay. It’s really good. Also reading Cronin’s The City of Mirrors. Also good but taking me more time to get through.

I did manage to watch the latest Cloverfield movie. It was pretty good but once I got to the end I was like, hmmm. I did not like the ending. I heard that there was an alternate ending and of the two, I liked this one better.

Not a thing. We’ve been eating out and although it’s nice not to have to cook I am getting tired of it.

This fire response. I’ve seen fire crews from all over. While stuck on the freeway, we saw squads from cities hundreds of miles away racing towards this fire. I wanted to get out of the car and cheer them on. So grateful for their presence.

That’s it from me. I hope you all had a good weekend.