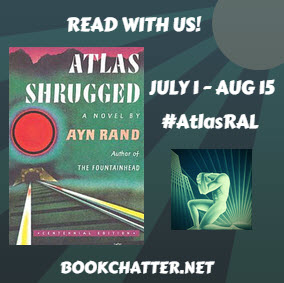 I’ve been on a Mad Men kick. I’ve watched seasons 1-5 in a very short time,  but a strange thing happened while watching. One of the characters mentioned Atlas Shrugged by Ayn Rand and then a season later it was mentioned again.

So far, I think it’s been mentioned a total of three times. Yes, I paid attention.

I read The Fountainhead years ago but never really had the desire to read this one until now. I casually mentioned it on Facebook and someone said they’d like to read it too and then so on and so on. Without really trying, a read along was born!

Here’s a blurb from Goodreads:

Tremendous in its scope, this novel presents an astounding panorama of human life — from the productive genius who becomes a worthless playboy — to the great steel industrialist who does not know that he is working for his own destruction — to the philosopher who becomes a pirate — to the composer who gives up his career on the night of his triumph — to the woman who runs a transcontinental railroad — to the lowest track worker in her Terminal tunnels.

I typically like my read alongs to be a little less formal and fun so I am not asking for mandatory posts or anything like that. The book is nearly 1200 pages long so I would love it if others could join me.

Are you in? If so, leave me a comment including the following:

42 thoughts on “The Atlas Shrugged Read Along (#AtlasRAL)”