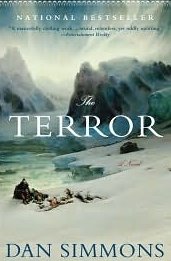 Every now and then you come across a novel that sweeps you up, and holds you captive. A book that continues to speak to you even after you’ve put it down for the night. I knew, about fifty pages into it, that The Terror by Dan Simmons was going to be one of those novels.

Here’s the blurb from the back cover:

“The men on board the HMS Terror – part of the 1845 Franklin Expedition, the first steam-powered vessels ever to search for the legendary Northwest Passage – are entering a second summer in the Arctic circle without a thaw, stranded in a nightmarish landscape of encroaching ice and darkness. Endlessly cold, they struggle to survive with poisonous rations, a dwindling coal supply, and ships buckling in the grip of crushing ice. But their real enemy is even more terrifying. There is something out there in the frigid darkness: an unseen predator stalking their ship, a monstrous terror clawing to get in.”

The world that Simmons paints is a bleak one. Two ships, the Erebus and Terror are frozen in place. With temps dipping well below the -50 mark, the crew battles frostbite and the need to ration their coal supply. This means frigid temps on-board as well as on-deck. Food is becoming scarce and to make matters worse, there is a strange creature out there, watching their every move.

The story centers around several key characters, one of which is Frances Crozier, a member of the Royal Navy and Captain of the Terror. Leading with a firm hand, he continues to motivate his men when needed, yet is quite capable of judging the situation and devising a plan of action. He has gained the respect of many of his men and they look to him for a way out of this dire situation.

As the story unfolds, several of the secondary characters are put into positions that force them to either rise to the occasion, or buckle under the pressure. Each chapter is told from that character’s point of view, and over the course of 750+ pages, you begin to see what each man is truly made of. In addition to the men, there is a young Esquimaux woman named Lady Silence. Rescued by the crew, she lives amongst the men and is unable to speak as she is missing her tongue. She is often a mystery and a curse to the men on-board the Terror but they do not turn her out.

To me, what makes a novel great is the balance between a strong plot, vivid characters and a good amount of conflict. This novel has it all. What I especially like about this novel is that the setting is also a character of sorts. The Arctic, the cracking ice, the fissures from melting ice and how it affects their day-to-day existence. These characters are constantly challenged and tested in a way that makes for a very satisfying read. It’s an historical adventure mixed with Gothic horror, The Washington Posts says it’s “Patrick O’Brian meets Edgar Allen Poe.”

Before this novel, I had never heard of Dan Simmons. After checking out his website, I see that he has written numerous novels and won several literary awards. His current book, Drood was just sent to me by the lovely Miriam over at Hachette and I cannot wait to dig into it!

This is a list of the books read in 2009. Click on the link to read my review.

Under the Dome by Stephen King
The Princess and the Pea by Lauren Child
Accidental Lessons by David W. Berner
When She Flew by Jennie Shortridge
The Complete Stories of Truman Capote by Truman Capote
In a Perfect World by Laura Kasischke
Forgetting English by Midge Raymond
Her Fearful Symmetry by Audrey Niffenegger
Saving Sammy by Beth Maloney
New Moon by Stephenie Meyer
Local Bounty by Devra Gartenstein
The Art of Meaningful Living by Christopher F. Brown
A Sportscaster’s Guide to Watching Football by Mark Oristano
The Girl Who Played with Fire by Stieg Larsson
The Return by Victoria Hislop
Of Bees and Mist by Erick Setiawan
The Girl with the Dragon Tattoo by Stieg Larsson
Goldengrove by Francine Prose
The Last Dickens by Matthew Pearl
A Mercy by Toni Morrison
Besty-Tacy by Maud Hart Lovelace
Secrets of a Christmas Box by Steven Hornby
The Day the Falls Stood Still by Cathy M. Buchanan
The Danish Girl by David Ebershoff
The Angel’s Game by Carlos Ruiz Zafon
Skeleton Creek by Patrick Carman
Bridge of Sighs by Richard Russo
Fear the Worst by Linwood Barclay
Historic Photos of the Chinese in California by Hannah Clayborn (text and captions)
The Shadow of the Wind by Carlos Ruiz Zafon
The Game On Diet by Krista Vernoff and Az Ferguson
Ugly Man by Dennis Cooper
The Blue Notebook by James A. Levine
The Art of Racing in the Rain by Garth Stein
Netherland by Joseph O’Neil
My Cousin Rachel by Daphne Du Maurier
Boneman’s Daughters by Ted Dekker (Audio)
Rude Awakenings of a Jane Austen Addict by Laurie Viera Rigler
Sunnyside Blues by Mary Carter
Foreign Tongue by Vanina Marsot
Prayers For Bobby by Leroy Aarons
The Middle Place by Kelly Corrigan
Love and Biology at the Center of the Universe by Jennie Shortridge
Cemetery Dance by Douglas Preston & Lincoln Child
Half of a Yellow Sun by Chimamanda Ngozi Adichie
The Guernsey Literary and Potato Peel Pie Society by Shaffer and Barrows
The Spare Room by Helen Garner
The Prudent Mariner by Leslie Walker Williams
Very Valentine by Adriana Trigiani
Nineteen Minutes by Jodi Picoult
Drood by Dan Simmons
Diary of a Wimpy Kid: The Last Straw by Jeff Kinney
The Laws of Harmony by Judith R. Hendricks
Dreams From My Father by Barack Obama
The Sum of Our Days by Isabel Allende
Things I Want My Daughters To Know by Elizabeth Noble
Let’s Get Fancy Together! by Jane O’Connor
The Terror by Dan Simmons
Twilight by Stephenie Meyer
Zen Shorts by Jon J. Muth
True Notebooks by Mark Salzman