Welcome to Moby Dick Monday! This is where we read four pages a day and then post about what we’ve read. Consider it an adventure of sorts!

This was an exciting week of reading because Ishmael and Queequeg are finally at sea!  We are briefly introduced to the rest of the crew. Starbuck is the chief-mate and a sea man at heart. He lost his father and his brother to the sea and apparently has ties to THE Starbucks which you can read about here. Stubb is the second-mate and a native to Cape Cod. We learn a bit more about Stubb later. Flask is the third-mate and a native of Martha’s Vineyard. Then we have Tashtego, an unmixed Indian from GayHead who takes Queequeg under his wing. That leaves Daggoo, the harpooner and Captain Ahab who is a bit mysterious at his introduction.

After several days of looking for Ahab, Ishmael goes up on deck and finally sees Ahab for the first time.

I was struck with the singular posture he maintained. Upon each side of the Pequod’s quarter-deck , and pretty close to the mizzen shrouds, there was an auger hole, bored about half an inch or so, into the plank. His bone leg steadied in that hole; one arm elevated, and holding by a shroud; Captain Ahab stood erect, looking straight out beyond the ship’s ever-pitching prow. There was an infinity of firmest fortitude, a determinate, unsurrenderable wilfulness, in the fixed and fearless, forward dedication of that glance. 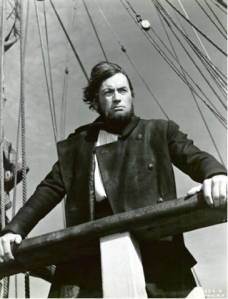 In one chapter, Stubb confronts Captain Ahab about the noise that he makes as he paces back and forth upon the deck. As the men sleep below, they are often disturbed by his constant pacing. It is in this chapter, that we first get a glimpse of Ahab’s personality. Ahab quickly puts Stubb in his place and in doing so, proves to Stubb that their captain is a force to be reckoned with. Shortly after this incident, Stubb has a dream where Ahab kicks him. At first Stubb is insulted by this. However, after much thought, he reasons that getting kicked with Ahab’s bone-leg, is not quite the same as being kicked with his foot. Being kicked by a bone-leg is almost the same as being caned. I chuckled over the logic in that statement.

The longest chapter in this week’s reading had to do with the science of whales. This was a fascinating chapter, but a bit long-winded. In it, Ishmael explains in great detail, the differences between whales and basically breaks them down into three categories:

In a nut-shell, whales are considered spouting fish with horizontal tails and that’s what I took away from this last chapter.

I am on page 160 and 32 chapters in and I have to say that the reading is flowing quite nicely. There was a lot of set-up, but now that we are on the ship and out to sea, things are beginning to happen. I am enjoying Melville’s use of language. It takes a while to get into the rhythm of his writing but I’ve caught myself re-reading passages, not because they are too wordy or hard to digest, but because they are beautifully crafted. The last chapter for this week was a bit too scientific for me, but those that enjoy that type of thing, will be gushing over it.

Reading Along With Me:

For those that are participating, share your post links in comments. What do you think so far? Oh, and if anyone wants to join us just leave me a message below.

Sent to Me by the Publisher: